Whoever says that wrinkles are “bad” should be hit repeatedly in the face with a scorching hot iron.

Wikipedia said ironing was “invented” so long ago in China, that no one is sure who or when it started. Fuck the Chinese and their goddamn civilization… These are the same people who brought us writing on grains of rice and chop sticks. Stop it. You are not helping.

Some American invented the electric iron in the 19th Century. Let’s exhume that asshole, just so we can kick his corpse.

The whole fucking fashion industry is a waste of time, money and resources, and when I’m world dictator, that Bullshit will be banned.

Alright, no one else is going that far? I get it. I like cleavage too. But can’t we all agree to stop wasting our lives and put an end this hot nightmare?

Who wants to iron and thinks it’s time well spent?

The Savages (my in-laws), that’s who.

They are the first to judge if there’s a wrinkly shirt or a crooked crease.

Our biggest fight in the past 3 years has been over pillow cases. FUCKING PILLOW CASES…

I say, take them straight out of the dryer and put them on the pillows. No folding, no storage in a closet. Just one set of pillows and pillow cases. DONE. That’s how I roll in Tucson, my friends.

The cotton is scalded to a fine point, and I’m scolded for questioning the wisdom of such a waste of time and energy.

Pillows are covered by all sorts of other shit when the bed is made:

10 minutes after I put my head on the pillow, no human could tell if it had ever been ironed or not. But OK honey, I’m the weird one…

The Bear, her mother (the House Elf) and her Aunt all have scars where a hot iron has dropped on something or burnt a part of their bodies. But they still keep ironing pillow cases, pants and shirts until the collars are covered in little burn marks. 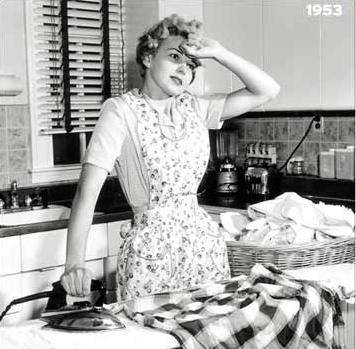 Stole this image from someone else’s blog. Ohh God What Fresh Hell is This…

If this was a job site, OHSA would have shut it down long ago. It’s a steaming hot, 2-pound, unstable triangle precariously balanced on a wobbly board held up with rusty, bent, folding sticks.

Sure let the little kids run around under the iron – that’s a great idea. It’s amazing every Savage child doesn’t have goddamn plates in their big bulbous heads.

We all have the power to end this nightmare. Just say no to ironing. If we all stopped it tomorrow, and no one said anything, we would never have to do it again.

Just stop ironing and shut your fucking mouths about the wrinkles — unless you want me to drop kick your corpse too.