A couple of friends of mine recently split up, and it made me think our species is really fucked-up.

The first thing out of most people’s mouths are these asinine questions that blame the participants:

I catch myself saying that kind of shit once in a while too, but that reaction is ass backward. The problem isn’t that couples split up — it’s just a fucking miracle that anybody stays together. 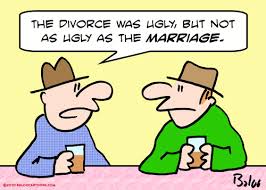 Sure you could try to find the one to blame for cheating or stealing or lying, but the relationship is usually dead before any of that shit happens.

People do the same thing with cancer. You find out someone you know has cancer and the first questions are:

Like old, bacon-eating smokers are the only ones who get cancer. That shit just happens. It may be great for researchers to find the causes, but you don’t own a lab coat.

Pulling causes out of your ass like a political opinion isn’t going to save anyone’s life. Somehow blaming the victim might make you feel a little safer, but it’s just fucking delusional.

Same for marriage. Blaming break-ups on some failure of one spouse or another doesn’t do the former couple any good. And it doesn’t make your relationship any more secure.

The Bear and I have been together for more than 30 years and fuck if I know what keeps it going.

I’m just happy she hasn’t killed me — yet. She has made it very clear that it will be death before divorce — my death that is. She says I probably won’t see it coming. I’ll be napping on the couch, and never get to wake up. (I love taking naps).

That was kind of unnerving for the first 10-15 years. I sorta napped with one-eye open for the entire length of the 90’s.

But after a couple of decades, you get used to the idea. There’s nothing like an ever-present death threat to focus the mind and make you wonder if your spouse is “happy.” (That’s just one of the things that makes my little Bear unpredictable.)

Getting two people to agree on anything, let alone almost everything, is mission fucking impossible. I don’t think humans are designed for monogamy. It may work for a lucky few for some period of time, but don’t expect it to last forever.

If we all got our heads out of our asses and looked at breakups as a normal part of life, maybe there would be a little less blame, a little less shame, and we could stop with all the stupid fucking questions.