I used to grudgingly respect Republicans. I didn’t agree with any of their trickle-down, deficit-hawk, invade Iraq bullshit. But I respected how strongly they believed.

A generation ago, they at least had an ounce of respect. They looked into crimes committed from the oval office. They urged Nixon to resign and sort of investigated Reagan’s missiles to Iran.

They were selfish pricks who didn’t give a shit about the poor. They didn’t just play hardball, they played “fuck-you-and-your-children ball” (never forget Judge Merrick Garland — they “stole” the Supreme Court). 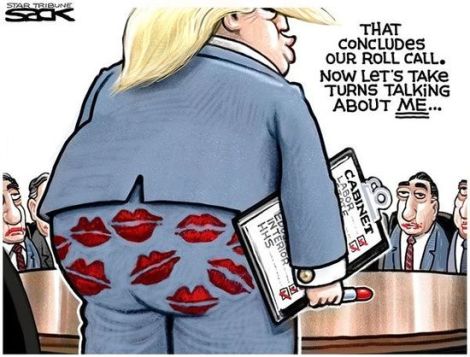 Stole the image from Daily Kos.

They did a lot more shit than that, but I don’t have time to type out of the volumes of text it would take to tell that story.

If you praise any American politician like you are in the fucking politburo under Stalin or a North Korean General kissing Kim’s ass, you’re just a fucking bunch of pussies.

Look at this shit. This kind of kiss-assery is completely unAmerican. No one in this country should support these fucking sycophants. If you voted Republican, and you are not ashamed of these toadies, you are a total Re-pussy-can.

I’m all for a conservative party in America. I probably won’t vote for it, but we need a strong party that is concerned about tax and government growth, willing to support military expansion and prefers local control and individual rights over federal programs. Sometimes those are the right things to do, and we need some one honorable to stand up for those principles.

Without a credible party on the right, the racists, fanatics and fascists will step into the void. It will be Charlottesville over and over again. No one wants a nominating convention full of tiki torches.

Same is true for the Democrats. Without a strong center-left party, the left extremists would fill that void. The Democrats have done a lot of bullshit in their time too. But they never sat in a cabinet meeting heaping praise on the “dear leader” like their fucking lives depended on it.

Who the fuck threatens nuclear war with “My Button is bigger, and my Button works” like he is in the middle of a junior high circle jerk?

All these fucking Re-pussy-cans have become a shithole of a party that’s willing to shutdown the government over dreamers who they say they want to help. We need a “Re-pussy-can Ban” to keep them out of office and out of power.

Maybe a few years out of power will beat the kiss assery out of them, and they can become Republicans again.

Check the date. I wrote this original bullshit in early 2018.  In the last almost two years, things have only gotten worse…  Muller found collusion, but as a Re-pussy-can himself, he didn’t charge conspiracy.  He did find 10-counts of obstruction of justice, but Re-pussy-cans apparently won’t prosecute their own.

Then came Ukraine.  Trump is at least right about one thing: “Read the Transcript” — it spells out the crime more clearly than a mob boss take down.  But he also knows Americans are too stupid and lazy to sort through 4 pages of niceties and fake praise to get to the key phrases.