It was fucking hot for Wisconsin. There were maybe 50,000 in this town, and most of them never ventured outside — all pasty people hiding in churches and bars.

We were 7 people (5 kids) packed for 2 days in the gold Oldsmobile Vista Cruiser (wood panelling baby). We were sick of driving — sick of stopping for pissing, puking or eating. (not necessarily in that order).

We had at least 1 more day to go to get to Lake of the Woods, Ontario, to hang out with some fucking half-Canadians and their insect friends. “Black fly” season was coming.

Dad, one of the intellectual giants of his generation, had been torturing us with the new tape deck playing hours of Italian sopranos hitting notes no humans should hear.

My parents saw the sign for tours of “Walter’s Brewery”. In the 70’s those local breweries were dying — slowly strangled by Budweiser and Coors with their legal restrictions on distribution and modern ways to brew cheap (shitty) beer with half the water. Mom just about killed all the active drivers in town running both red lights in Eau Claire to get beer 2 minutes faster. 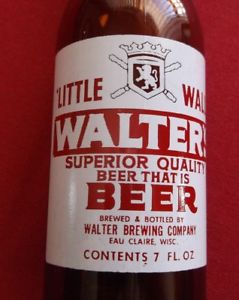 The original Walter’s Brewery is no more, but Wisconsinites still talk about the magnetism and magnitude of that tour.

“..the tour consisted of a few steps across the tank room to a tap in the wall. After two or three glasses, the tour was over!” http://www.waltersbeereauclaire.com

“Look kids, big tanks” — straight to the tap. The brewmaster looked at my dad. “I can’t give them beer, but you can.”

It was a fucking 19th Century fire brigade, pouring and passing all the glasses as fast as we could before the adults changed their minds.

I remember being at the far end of the line. My dad never looked so happy (until the day I moved out of the house). My siblings were making various faces from disgust and bitter head shakes to sly “mona-lisa” smiles of delight.

I sipped. It was cold, and smooth, and flowed like liquid honey to the back of my throat. It rolled nicely on the teeth, and the after taste was slightly warm and sweet and just as smooth as it started.

I had had sips of beer before. Dad and his friends made us open bottles of Stroh’s or Old Milwaukee (or whatever the cheapest ass bottles could be bought by the case). We took a little nip before carrying it over to them. But that shit was watery, bland and bitter all at once. The after taste was an ode to leaded gasoline. I preferred sipping out of the martini’s — vodka or gin were fine.

But this Walter’s Beer was the fucking elixir of life. The kids, who didn’t like it, kept passing them down the line.

I stopped sipping and starting pouring waves of Walter’s Beer into my mouth. As soon as I finished one, there were two full glasses waiting for me.

“Take it easy, take it easy,” Dad said. But the beer man knew when he had a future addict on the line. “He’s doing fine, let the young man enjoy his first beer.”

I set a goal to finish every glass in front of me. Let that be a lesson to ya, Joe, you half-beer-drinking, quarter-cookie-eating, little-fucking pussy.

Joe is an old man now, and I could outdrink him with my first beer at age 11. But I’m not too proud of that, because every 11-year-old I know could outdrink Pussy Joe.

Honestly, I don’t remember the rest of the drive to Canada. I remember the beer, and then we were magically in “another land.”

I “lost” a day or so, but I had to hold the memory of how Walter’s Beer from the tap at the brewery tasted for the next 30 years. Because all the fucking local breweries went out of businesses.

“Good beer” didn’t exist near me in Ohio or Arizona until I was 45. It was like fucking North Korea. Beer had been gone so long, we didn’t even know what we were missing.

The propaganda machines out of Budweiser, Miller and Coors kept telling us they were “premium beer”. Competing to create songs about how they were the best beer in the world. We had nothing to compare it to, and we believed the “Less Filling – Tastes Great” debate like it came from the Dear Fucking Leader himself.

But those days are gone… Hell, I have 3 friends who brew better beer at home than anything I drank between 1975-2005.

In the last 10 years, I’ve had a lot of good beer. But nothing will compare to my first beer — when my life changed straight out of the tap at Walter’s Brewery in Eau Claire, Wisconsin.