Not in front of the children

Grown-ass men tell me to “watch my language” when kids are around. Fuck that.

Those kids have heard all the dirty words I could possibly utter. Most of them probably heard it all from their parents. That’s how I learned it. 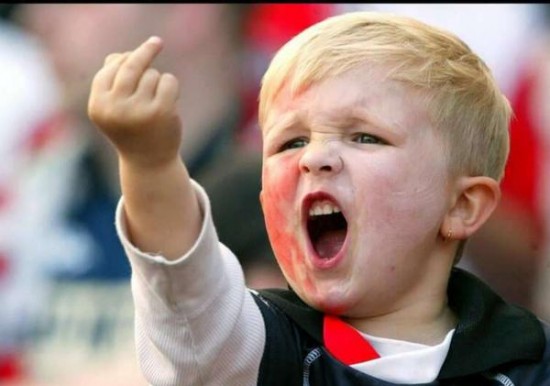 And if they didn’t learn all 7 words you can’t say on TV from their families, they heard it from all the other kids by the 3rd grade.

Besides, I’m not talking directly to these little shits. Mostly these kids are around when I’m on the tennis court or in the bar at the 3rd world racquet club. I’m just talking to my shit head friends, and there’s only one language they understand — right Pussy Joe?

“Their parents may not be happy to hear you yelling ‘Mother Fucker’ across the court,” Gibson said. “You get one complaint, and they could kick you out.”

Why the hell is your kid running loose near a bunch of old sweaty men with (tennnis) balls in their hands? Or running around a bar after 9 p.m.?

It’s not going to hurt them to hear a few dirty words. If they don’t learn it right from our generation in a controlled setting like the 3rd world club –where are they going to learn? Out on the street from some paranoid schizo pushing a stolen Safeway shopping cart? Based on the teen pregnancy rate, that must be how we teach sex ed in Arizona…

So let’s not turn cussing into a huge fucking abortion of a problem too.

I know exactly how my kid learned how to cuss in the 90’s. Every work day, the Bear drove him to a Savage house for daycare. Before he was 2, we bought him on of those little plastic cars for toddlers — you know the cars they move with their little webbed feet.

He jumped behind the wheel, hit what would be the horn and yelled “Ohh Shit, Ohh Shit. I’m late. I’m late. Goddamnit… Goddamnit…”

He learned that shit just like I did. Thanks Mom.

A few months later, he couldn’t really say his T’s or R’s. They all come out like S’s or F’s. And when he was in the car, he was truly fascinated by “Trucks.”

He pointed and said: “Fuck, Fuck.” He quickly learned “fuck” was funny, so he said it louder and faster.

“He means ‘truck,'” we would say to strangers in the grocery store. But after a couple of months, I was pretty sure that little fucker was messing with us.

He claims he doesn’t remember it, but he spent a good 6-months giggling and throwing out F-bombs to everyone who would listen.

Besides there’s some research that shows people who cuss may be “happier” (whatever the fuck that means), “healthier and more honest.” (See my rant on Pursuit of Happiness — bullshit).

So let’s take it easy with restricting the freedoms of adults just because some little shits have wandered into ear shot.

PS — I stole the photo from this site: https://listelist.com/erich-fromm-alintilar/ Apparently they had an article (I can’t find) about how Dutch parents and children love to cuss in English. Who fucking knew the Dutch had a sense of humor?