Not possessive — it’s not “The Devil‘s Strip” like a goddamn adult would say — it’s just “da Devil Strip” — like you say if you are still in fucking kindergarten.

Akron even has a magazine called The Devil Strip. 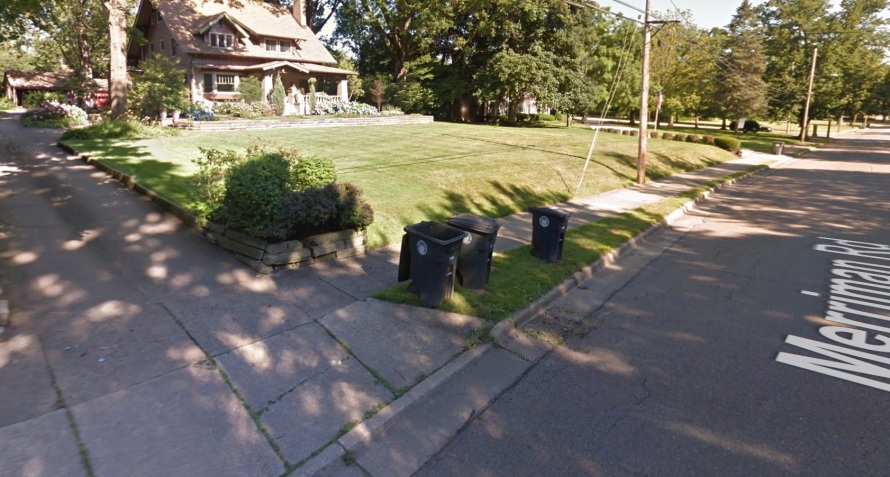 I don’t know the official origin of the term. But I know as kid growing up on busy Merriman Road we said if your face hit that strip, you were probably going to see the Devil.

Maybe it could have been the “Jesus Strip,” but we were pretty sure these sinners were not going to meet Jesus.

Merriman Road wasn’t merry at all. It was a piece of shit narrow two-lanes. It was the quickest way out of town to the rich neighborhoods. It was filled with school busses, city busses, commuters and garbage trucks on the way to the dump.

There was only 1 street light for 3 miles — that light was 250 feet from our driveway. The speed-limit was 35. If you drove like a human being and kept it below 40, you and everybody else got to live.

But during rush hour it was full of road raging douchebags going 50-70 mph, and taking the bends and turns in their “found-on-road-dead” Fords like it was the last turn at Indy.

At night the road was full of drunks and drug addicts leaving downtown for the suburbs.

They would usually crash themselves into our limestone planters on either side of the driveway or into the neighbor’s 2-ton rocks. A few crashed into the telephone poles. One dumbass just ran off the road and straight into our little hill and embedded himself and his car in our lawn.

I only heard that story. It may have happened before we moved in. But I know it’s fucking true.

You want to know how? Because years later I had to mow that fucking grass in the front of the house.

I learned to stop and look for shards of windshields, metal and other fragments that would “resurface” like mammoth bones all the way up to the front of the house.

If I didn’t, that fucking Lawn Boy would frag me with flying shit in both shins. I’ve got the scars to prove it.

I moved away from Akron long ago. But just ask my shins, that grass between the street and the sidewalk will always be the Devil Strip to me.