This week I have to decide if I’m going to join the Pendejos on their annual pilgrimage to the Newcombe Tennis Ranch (Newks) in New Buttfuck, Texas (actual town name may vary).

It’s 3 days of following 50-60-year-old wanna-be-tennis-players being herded around the courts by 20-year-old tennis pros.

From a helicopter it must look a lot like sheep being herded by dogs. These kids stand on the side and bark brilliant pieces of wisdom like “move your feet” or “watch the ball”. And they hound us to hurry from one court to the next for the another round of brilliant deductions. There’s a shit ton of tennis instruction, but nobody is getting better in 3 days.

It’s 3 nights of reliving a college dorm experience with unlimited access to other people’s alcohol — and if you play your cards right, free weed. The big event of the weekend is a beer chugging contest they call the “boat race”. We are all way too old for all of this.

My knees can’t handle the days. My colon can barely tolerate the nights.

Pussy Joe and Goat-fucking Geno organized this trip and berate 7 to 12 other dudes from the Third World Racquet Club to join them. Taking the trip makes you a true Pendejo of the Third World.

Joe and Geno have been going together for 25 years. It’s a lot like taking an anniversary trip with your parents. They alternately argue or cuddle, and it’s all very awkward for the rest of us. 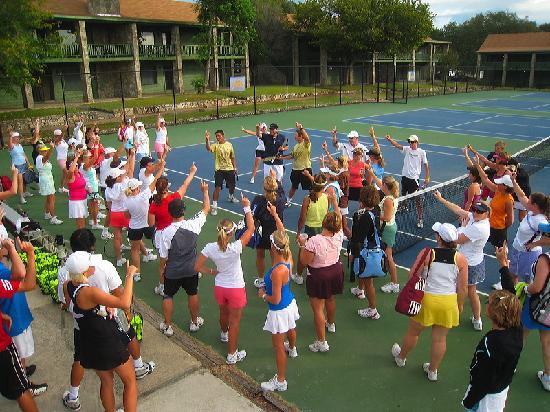 Joe and Geno don’t even bother to take part in the tennis clinics.

They wake up around 11 and wander around the courts in bathrobes (or covered in neoprene) like they are Hugh Heffner, and we have been locked up in the Playboy Mansion for the weekend.

In the afternoon, they beg us to quit the courts, become their little “bunnies” and join them in the “hot tub.”

I’ve been going the last 3 years. Gotta say I enjoy the drinking, and there are dozens of people that know how to talk some shit.

I’d also like the tennis, but right when I started going on this trip, I developed tendonitis in both knees. They swell up in the first 3 hours, and then ache for the next 6 days. Each year, the knees have gotten worse.

“Just go and stand on the side like Joe and Geno,” Angry Ed said. “You gotta come, you are the voice of reason on this trip.” (Yes, bullshit blog readers, it is that bad).

But I don’t own a bathrobe (I don’t think they make them in 5X size) and it’s fucking humiliating to join the pussy and the goat-fucker on the sidelines. I’d rather be the water boy at a corn-hole tournament.

A month ago, I saw a sports doc, got new knee braces, and got “prolotherapy” — a bullshit shot of dextrose that makes the knees “worse” in order to make them “better.”

Cycling doesn’t hurt anymore, and I have a hope they will be better in another month. That lines up with Texas trip time.

So I’m looking in my knee-pain crystal ball and guessing how they are gonna feel in mid-October. I see relief and then pain.

Saturday morning I played tennis with the old guys in Gilbert. Those fuckers see the knee braces and start drop shotting and lobbing until I cry. But this week I got to a couple of drop shots and ran down a lob without tears. I even poached twice and surprised the shit out of them.

In the 3rd hour of play, the ache came back and I just wanted to go home and sit in an ice bath… See, relief and then pain.

This week I’m going to cycle. If the knees feel good after the ride, I’m going to check out flights from Phoenix to Texas in October… (spotlight on me for soliloquy).

“So to Newks or Not to Newks, that is the question?

Whether ’tis nobler in the mind to suffer

The verbal slings and volleys of outrageous pendejos,

Or to take arms against a sea of Pussy Joes

And by opposing end them. To suffer endless embarrassment,

And by embarrassment to say we end

The sobriety and taken on a thousand natural slurs

That drunken flesh is heir to…”

If I can keep the costs below the tankless hot water heater… “to Newks” will be the answer. Or Not.

Yeah, I didn’t go. My left knee got better, but I couldn’t play for more than 20 minutes before my right knee was killing me. Saved the flight, the Newks money, the Uber and the booze, so I could get platelet enriched plasma injected in both knees. Let’s see if that shit works…