My Fucked-Up Tennis Team is now completely fucked-up in an entirely new way.

Fans will remember these previous versions:

Well in 2019, on the “40 and over team” there will be no one well enough to play. Every match takes 8 healthy bodies.  There’s 18 names on the list, but that’s fucking Fake News.

Larry’s elbow looks like a new case of elephantitis (for fuck’s sake).  He can’t straighten his arm.  Larry has always had the second serve of a toddler, but now everything over his right ear looks like it’s being hit by an indifferent, petulent child who doesn’t want to even try.  It’s enough to make a grown man cry.

Griff, the tennis dracula, can’t seem to recover from a broken wrist.  It hurts every time he hits a forehand.  So what do we assholes do in practice? (In PRACTICE) We blast the ball as hard as we can at his limp wrist just to win a few meaningless points.  That shit makes it impossible for him to have a healed appendage in time for the actual match. Brilliant.

Nelson has had back surgery and both hips replaced, so what did we do?  We rolled his big ass out on the singles court to see if he would survive. He did, but it’s doubles for him from now on.

Speaking of fat assess, I’m off the court (maybe forever) with my fucked-up knee.

That brings us to Jon Lee.  He went for a walk last summer and hasn’t been seen on a tennis court since.  “I think he hurt his ankle hiking,” Griff said  with the kind of disdain  a barbecue master would save for describing “tofurky“.

The remainder of this team can best be described as “recovering weekend warriors” — destined to be future cripples. 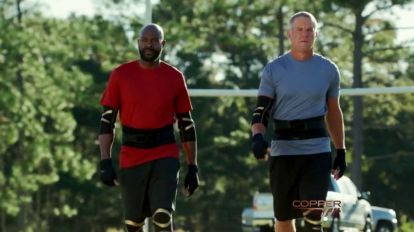 “I just might have a problem, that you’d understand. We all need some braces to lean on.” — Bill Withers, sort of

Tom tore his achilles and has recently returned, but sorry to say we all see a second tear in his future.

Chris learned to serve left-handed because his right shoulder was such a mess.  Now he switches and serves with both hands. Our prediction: his surgeon will be double dipping when he tears both rotator cuffs in the same match.

Marco hasn’t had any major injury, but just look at his belly when he wipes the sweat off his face with the front of his shirt — that shit can’t last.

But at least we are in the 40-and-over league.

“In the 65 and over, you have to get at least 25 guys on the team every season,” said Griff, the grizzled voice of experience.  “Because some of those guys are gonna die.”