Bernie, AOC and some of the new flaming liberals have a long list of shit they want to change.  I’m with them on most of it, but not one…  Fuck Free College.

We don’t want to repeat “senioritis” from high school with bored kids hanging out for a decade in “college” to avoid getting a job and real responsibilities.

College “kids” are really young adults.  And like all adults they should pay for the services they use.  Nothing focuses the mind like watching most of your paycheck go to tuition.

I’m not defending the current bullshit system of astronomical costs and unforgiveable loans. That’s fucked-up and only works for the top 10 percent of earners.

The current system is perpetuated by the rich who can use high tuition as a barrier — so their dumbass kids don’t have to compete with superior students who have inferior bank accounts.

“My kid gets in, because I bought a new wing for the library.” Or cheat like hell on SAT’s or bribe a coach for fuck’s sake.

All that shit is ridiculous, but if you are paying $200k so your kid can major in theater, you are buying your way into an exclusive club too.

Along with the benefits to rich parents, the banks and the federal government profit off “the unforgiven” – those student loans that must be paid in full with interest.

Banks are in business to make a profit, but they don’t need to make their profit off poor students — they can take a little more risk on the young.  And there’s no reason the federal goverrnment should profit on student loans. 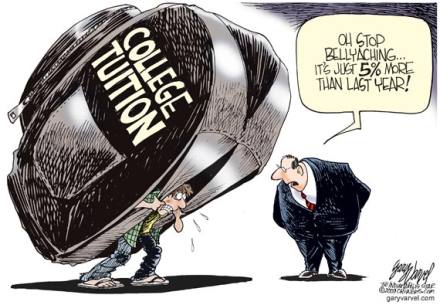 People should be able to walk away from student loans like it’s a credit card or a house.  There are serious punishments in place for defaulters on any loan, bad credit rating, no credit cards, harder to get a job…

Only the scumbags will walk away from those loans on purpose.  But the college-loan shit we have now is creating modern-day indentured servants and economic slaves. That’s no good for anybody — including the banks.

We definitely need to change the system and maybe the call for “free college” is a good place to start the negotiations.  But the real goal needs to be affordable college.

A shit-ton of good things have to happen just to make it affordable AGAIN:

That’s just on the college side.  We also need to raise wages and reduce housing costs for young adults, so they can afford to work part-time and get through college with minimal loans.

That may seem “impossible”, but it’s not.  We have done it before.  That’s exactly the system we had from 1950-1980 (or so).  We just slowly eroded support for higher ed and kept setting higher and higher expectations for student housing and services, while freezing the minimum wage.  The combination moved education further and further out of reach.

But if we want to continue having one of the best higher education systems in the world, we need to make some changes.

The real goal needs to be to make college affordable for those who really want to go.  Ohh and let’s think about technical and trade schools too.  Not everyone is cut out for college, and there’s plenty of opportunities in the trades.

But fuck free trade school too.