Tax Thee, Not Me

No one wants to pay taxes, not businesses, not people…  but I say we start with those buildings with a steeple.

The government is setting new records for debt.  The Republicans are to blame (again) with another massive tax cut.

Their solution: take away health care for the poor and the sick, and cut everything to the old (medicare and social security).  Hey let’s cut Special Olympics too (oh no let’s not do that — shows us for the evil bastards we really are.)

If we actually make any of these cuts, who would take care of the poor.  It would fall to private charities — most of them religious.

And they are anxious to get that publicity.  Mother Teresa was not famous because of her “work.”  She was famous because the Catholics marketed her like a Kardashian without a butt.

A food kitchen, a small hospital, maybe help fund a shelter — build them far away from the actual church — we don’t want to have to look at those people.  Any church can fundraise on the pictures of the starving children and take its cut of each dime.

And when there’s little or no support from government, church attendance rises.  Whether it’s conscious or unconscious, families seek that community support.  It’s nice to know the people on Sunday may support you or your children through the bad times.

The churches know when there is a decent support system, attendance plummets.  Look at Norway or most of western Europe. When economic fears of starvation and ruin are reduced, the belief in the religious bullshit recedes like a red tide on Florida.

I say we cut out the middle man in the dog collar, just tax the churches and use those funds to directly support the poor ourselves — without the need to kneel before a non-existent almighty.

We don’t even have to change any laws. Churches are only tax exempt because of they are “non-political”.  But they are all fucking political.  Every stance to bring prayer back to schools, to push to support charter and private schools, every anti-abortion march is a political statement.

Religion is fast becomming the line of demarcation between Republicans and Democrats. The Christians are lining up with the Republicans, and everyone else falling mostly to Democrats.

Even Denis Prager  (and his bullshit “university”) thinks the churches are too political — but this dumbass thinks it’s in support of the left.  I guess he can’t read surveys.

But at least we can agree, religions should  stay out of politics.  And the law says when they don’t, they should be taxed.

Taxed at the highest tax bracket.  Lest ye think these churches are poor, a few quick facts:

Don’t even get me started on these personality cult, mega churches.  Osteen and his ilk aren’t even bothering to pretend to be a charity… 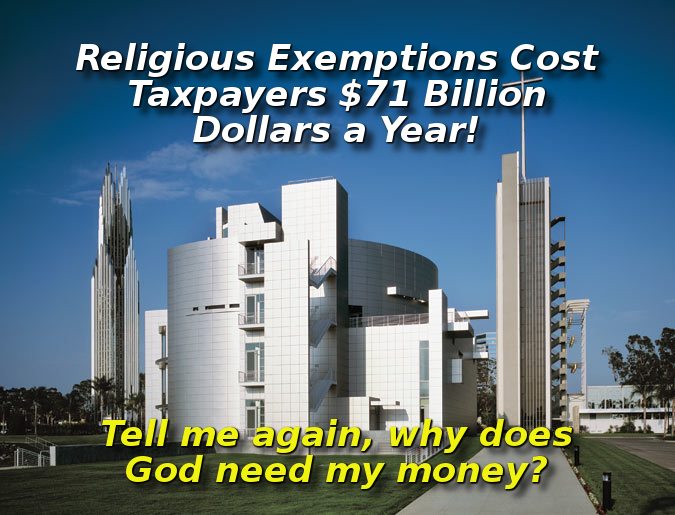 Who knows if the numbers are right?  But it’s a good question: why is the “Almighty” always poor?

But truth be told, all of these facts could be wrong. Why?  Because nobody audits these mother fuckers.  When it comes to the collection basket, the preacher only has to report to “god.”    If nothing else, we should tax these churches just so we all can see what the fuck they are doing and maybe where their money is coming from.

Remember Mother Teresa, she took funding from fraudsters, dictators and drug lords and never told anybody what she did with it. Most people think she collected far more than she ever spent on the poor.  At least taxing the Church would force some kind of public report.

Maybe it’s just me, but every time I pass a building with a steeple, I look at that corner lot, the big building, the empty parking lot and wonder how much fraud and waste went into creating that thing?  Let’s tax the shit out of it, and find out.