Cussing Makes Me Better Than You

Remember when Sister Dorothy threatened to kick you out of the 8th grade because you said “bullshit” twice in history class.  Ohh, didn’t happen to you?  Well, it should have, because she was wrong and I was right, goddamnit.

There’s more and more research to show that cussing makes you:

You know, just a better fucking person than all those stuck up assholes who act all butt hurt when you tell them their religion is bullshit. 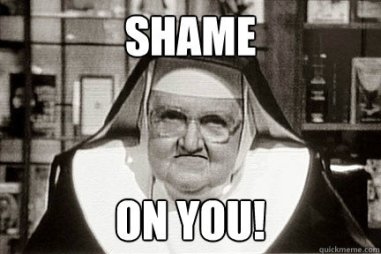 Hey, hey, why pick on the religious?

Because it’s those fuckers who are the first to enforce the notion that there are “dirty words” — with their disappointing glares and their rules that you can’t say mother fucker in church.  They may have even invented self-righteousness with that god damn  “don’t take my name in vein” crap.

The Benefits of Shame

Turns out there are hidden benefits to the shame and blame system for controlling people (especially children).

Apparently, your brain creates a whole new compartment for dirty words.  In dementia patients who have lost most of their language skills, cussing is one of the last sections to go.

And when we throw out cuss words our brains release “endogenous opioids” and other chemicals that help us feel good — like we took just a little dust from an oxy pill.

They say it doesn’t work as well if you cuss all the time, but fuck moderation.  I’d rather have a little taste of oxy all the time than hold it all in for a bigger bump when I hit my thumb with a hammer.

My Fucked Up Theory

I’ve got my own fucked up theory as to why cussing makes you better.

People resist authority.  We may follow the rules of society, and we may allow the alphas to dominate “the rules.”   But deep inside we hate those bastards.

Cussing is a way to express that frustration without destroying civilization and getting out the guillotine to lop off  the heads of the .1 percent.

Cussing is our guilty pleasure to fight the power without threatening the structure that brings us clean water, provides plenty of cheap food and flushes our shit far away from where we eat.

So if you want to be a better person, fuck exercise and eating right — just cuss more.  You will be doing yourself and our society a big favor.  And by now, even Sister Dorothy should know you were right all along.