I used to think I would never understand Evangelicals for Trump. What the fuck is  wrong with these people?  Can’t they read their own book?  Trump is wildly popular with the deluded.

If you look at the data, it’s almost exclusively white Evangelicals who back Trump. The more “churched,” the more they love him.

As a joke, one of my 8 readers, Paul Brennan, sent a message through his nephew Mike.

And you know it’s funny because those Brennans are related to The “Professional Comedian” Brennans, Kevin and Neal  — so it has to be funny. It’s in the family.

I googled “Gay Nazis for Jesus.”   I always wanted to be put on an FBI watchlist.

I learned maybe Paul stole the title from gagswag.com. (or maybe great minds think alike). Wasn’t that a song in Springtime for Hitler? 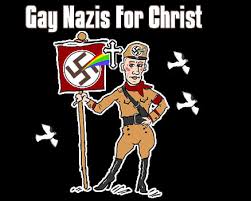 I tried coming up with my own oxymoron political groups:

But in 2019 slight hyperbole as satire is dead.  That rubber band snapped when the Putin Puppet “took over America.”

There probably are bankers in Conneticut ready to vote for Bernie.  I’m sure MSNBC could find a few traders who like Warren.  If Trump can get 3 black people to his rallies, we can probably find at least one subaru-driving Texan in a flannel shirt to hold up a “Commies for Ted Cruz” sign (even if it’s just a joke).

But my shitty slogans are one-offs and unicorns.  There is definitely something to Evangelicals and Trump support and surprise, surprise, gay Nazis.

I spent 5 minutes on the Google and holy fuck, there actually were Gay Nazis (who may also have been for Jesus). There’s a whole book called The Pink Swastika.  The leader of the brown shits was gay. And through the 1920’s and early 30’s, gays were welcome in the Nazi Party.  The party was catering to Catholics too.  Who knew the Nazis had such a “big tent.”

Of course, Hilter eventually killed the leader and destroyed the Brown Shirts in favor of the Gestapo.  Nazis grew closer to the Catholic Church and eventually started killing gays too.  But every totalitarian rule turns on its own. Isn’t that true, Senor Trotsky?

I’ve got 3 reasons these evangelicals continue to lick Trump’s boots:

In the 2000-year history of Christianity, it was mostly infested and invested with totalitarian regimes — from the Ceasars of Rome to the Kings of England.  No wonder they love a potential dictator like Trump — feels like they are finally coming home.

Democracy bloomed in the largely secular Greek culture with a nod to its pantheon of gods — no single god had all the power. But monotheism and “God the father” fits neatly into the language of the tyrannt. Trump can’t quote the Bible, but all those little preachers can.  Every Sunday they reinforce the message that “only he can save us”.

Christianity really didn’t get “behind” America until the 20th Century.  That’s when E Pluribus Unum got replaced by “In God we Trust” — “Under God” was imposed on the Pledge of Allegiance with a double pregnant pause. “One nation (pause) under god (pause)”.  You know damn well something has been shoe horned into a poem, when it needs commas on both ends.

But in the 21st Century stoked by fear of brown people and fear that bible-thumpers will become irrelevant, the Evangelicals have firmly held the hand of the orange devil with the weird hair.

These are the people who burned witches in Salem and defrocked Jimmy Swaggert for fucking prostitutes.  Maybe they can find a conscience (or finally become conscious) and switch to a new leader before they become a footnote in history  — just like Gay Nazis for Jesus.