PayPal is no friend of mine.  I’ve been banned.  I “knew too much.”

Fresh off a course in internet fraud, there was a 25-cent charge on my PayPal account.  That’s how the fraudsters get ya.  They throw in some innocuous charge, see if the transaction clears.  Then hit you for your full credit limit.

I immediately called and demanded the charge be removed.

“The charge came from Facebook, sir.  Are you sure no one in your family made this charge?”  It was said in an unbelieving tone from an all-knowing customer service agent who has been down this path before.

My family was not big Facebook users, and certainly not Facebook “chargers.” My PayPal account was ancient — at least 5 years old.  I used it once for a transaction too big for a credit card. I was the only one who knew the username and password.

The 25 cents was removed.

Not more than 30-minutes later, another 25-cent charge appeared. Fuck.

These Russian fraudsters are stubborn as shit.

Called again. Same conversation.  This time a different all-knowing PayPal agent said if I reversed the 25-cents my account would be suspended.

The next day the Bear called.

“What is going on with the PayPal account?  I can’t buy lives on Candy Crush anymore.”

I had no idea she even knew what PayPal was.  I still don’t know how she “found” my old account and got access to it.  Bears are clever when they need to be.

But I shut that shit down.  I wasn’t going to go broke to Candy Crush.  That company makes $1.8 billion a year, 25-cents at a time from bored suckers who just need one more level.

School had just gotten out.  The Bear was bored and (in my head) she was ready to spend us into oblivion.

A sign of her addiction: she learned how to device switch to keep her Candy Crush going.  Moving from the laptop, to the computer, to the phone to the iPad, until she beat all her friends, her students and everyone she knew.

She even beat “Candy Crush.” itself.

Twice in the past 5 years she had “reached the end.”  No more levels existed.  Twice Candy Crush made more levels — just for her, we thought.

She didn’t need PayPal to do it.

PayPal in a pandemic

Until the pandemic hit.  Then we were both bored at home. Went to buy a dog. 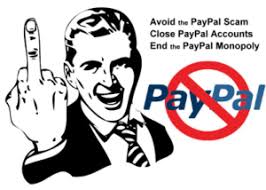 Stole the images from here.

This Candy Crush bullshit was back — half a decade later.  We wanted that dog. The clock was ticking.  It was a fucking dog auction and the first one to pay gets the puppy.

I started on PayPal Chat — no answer. I called — voicemail.  I was cussing and clicking and thinking of ways to destroy Elon Musk before that alien takes over the entire planet.

The Bear slips into the other room.  Sets up new PayPal account. She had the receipt for the puppy in hand before my blood pressure could kill me. Bears are clever when they need to be.

Then came the “first nag” from PayPal customer support.  They emailed, they left text messages, they called at the worst possible times.  It was three days of the PayPal nag.

We never connected and fixed my original account.  That shit is dead and buried.  We are buying through the Bear from now on. PayPal is no pal to me, so stop calling Elon. I’m not coming back.